Service Area
Free Quote
Home»Service Area»Services in Huntsville, ON
Contact Us For
A Free Estimate!
Reviews From Huntsville
See All Reviews
Products & Services

Before and After Pictures from Huntsville

Waterproofing Full Perimeter in Huntsville, ON

These homeowners in Huntsville, ON, were extremely disappointed with their new home. Every rainfall or snow thaw was causing significant water damage to their floors and walls. They knew that to entirely and permanently solve their water seepage issues they would have to waterproof their entire basement.

They were referred to Clarke Basement Systems and had System Design Specialist, Rob Malcomson, inspect their home. He came up with the plan to install all of our guaranteed patented products such as CleanSpace®, WaterGuard®, SuperSump™ Sump Pump and IceGuard® Discharge line to waterproof the entire perimeter of the basement.

With all our patented products installed, the homeowners are relieved and happy to be able to enjoy their home again with their 25-year warranty guarantee.

We will properly install a hidden drainage system in your Huntsville basement and completely encapsulate your crawl space with CleanSpace vapor barrier. We are here to solve the problem for you.

Foundation repair problems destroy your Huntsville home’s value and can be dangerous. Our in-house team of structural and geo-technical engineers are here to help. We design and install the right solution and usually have the project finished in less than a week. You will have peace of mind as we provide a 25-year written warranty against defects on our foundation products.

The sunken and cracked concrete around your Huntsville home is both an eyesore and a safety hazard. It is also likely to get worse with time, but we can fix it for you! 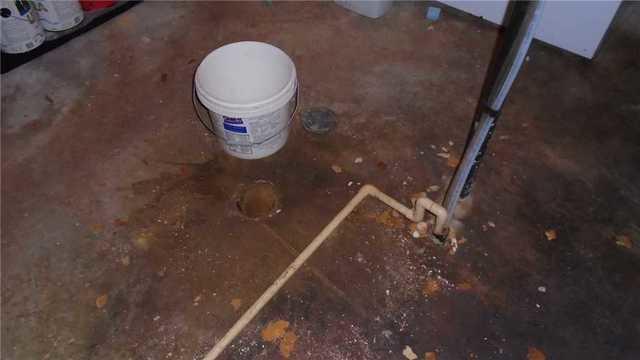 Homeowner in Huntsville, ON, had just bought their home. To their unpleasant surprise, they had massive flooding in their basement. For every...
Click to read solution...
More Case Studies
Job Stories From Huntsville, ON
Complete Waterproofing System Installation in Huntsville, ON

This homeowner in Huntsville, ON, had recently bought their home only to their surprise and disappointment, they had a lot of flooding in their basement. Every time there was a rainfall or snow thaw, there would be water damaging their basement floor and walls!

They knew that they needed a permanent solution and couldn’t pick just anyone to fix their issues! They needed Clarke Basement Systems. After being referred, they made an appointment for System Design Specialist, Rob Malcomson, to attend the home and conduct an inspection.

He concluded that to stop water from leaking into the basement, we would need to permanently waterproof the full perimeter of the basement. The products we would use to do this are WaterGuard®, CleanSpace®, a SuperSump™ Sump Pump and IceGuard® Discharge line.

After putting a guaranteed plan in place, Installation Foreman, Jose Martinez and his team began installing!

First, they installed our CleanSpace® Wall Membrane on the exterior foundation walls. CleanSpace® is a drainage matting that directs any water to our WaterGuard® perimeter waterproofing system. Next, we supply and install our WaterGuard® waterproofing system into the subfloor perimeter of the basement. WaterGuard® deals with water entering at the floor wall joint and drains to our patented SuperSump™ sump pump system. The water is then directed to our patented IceGuard® discharge protection system, which leads water out and away from the home.

Once the work was completed, the homeowners were ecstatic with the final results. They could finally feel at ease with the assurance from the repairs that were made and knew that their investment was salvageable.

Do you do foundation work in Huntsville?
Project Location: Huntsville, ON

Basement is leaking significantly in spring thaw; however sump hole isn't filling very quickly so am concerned about state of the house's weeping tile and also potential for foundation issues. Please contact me by phone if possible. Thanks Neal
Project Location: Huntsville, ON

Two concerns: 1. Need a concrete slab foam jacked. It has settled and bowed in the middle. 2. Have a cinder block foundation with a leak.
Project Location: Huntsville, ON

Hello, water seeping into basement and overall high humidity in the house.
Project Location: Huntsville, ON

I have a cinder block basement and a block has popped out and I have some bowing on my back muskoka room I'd like to get fixed
Project Location: Huntsville, ON

Water is seeping into our basement which is partially finished. We'd like to install an interior drainage system to catch the water at the base of the wall where it is coming in and direct it to an existing drain. Recommendations and a quotation would be appreciated! Thank you.
Project Location: Huntsville, ON

Hello. Previous, and satisfied, customer. Have a new house in Huntsville. Has foundation cracks. And garage and basement floor cracks. And basement walls are wet behind insulation. Want to discuss cracks, insulation, interior waterproofing options, and a battery backup sump pump. Thanks!
Project Location: Huntsville, ON

Hello, looking for some slab lifting for a customer in Huntsville. Looking for a price and availability. Thanks in advance.
Project Location: Huntsville, ON

I'm looking for a battery backup for my sump pump.
Project Location: Huntsville, ON

We have a cottage across from deerhurst, you have been highly recommended. We are doing some major renos and when the basement was peeled apart we noticed the foundation is shifting/tilted,as well as some sizable cracks in the foundation between the blocks. We have done some work on the shoring front. I would like a quote on fixing the foundation as with the cracks the water will likely still find it's way in, we have done a new drainage system, retaining walls etc already. I would also like to know how to straighten the cottage back up as it is leaning towards the lake.
Project Location: Huntsville, ON

I had robert come Langton come by but I never did get a quote from him. Can you have him call me.
Project Location: Huntsville, ON

My house needs your help!
Project Location: Huntsville, ON

Require estimate to seal a basement cold-room that is leaking Need appointment this weekend Sep 23 or 24th till 2:00pm as I'll be leaving to go back to the city Looks forward to hearing from you - please call for more info or to schedule an appointment
Project Location: Huntsville, ON

Water leaking into basement every rainfall and flooding in spring, we need help
Project Location: Huntsville, ON